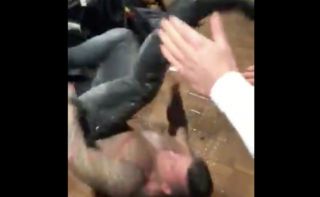 Romford FC play in Non League Division One and are owned by Glenn Tamplin, a larger than life character who formerly owned Billericay Town and signed the likes of Paul Konchesky and Jermaine Pennant.

Videos of him singing with his players, such as the one below, left him open to ridicule, but it appeared to engender a real fighting spirit within the dressing room.

After his bottom-of-the-table Romford team went to table-toppers Maldon & Tiptree on Tuesday night and came away with a shock 3-1 away win, Tamplin was at it again, only this time, topless breakdancing on a wet dressing room floor was the order of the day.

When the bottom of the league make a real statement against the league champions to be pic.twitter.com/OhwjGlbr5U