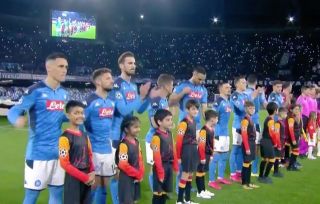 Although the San Paolo was far from a sell out for Napoli’s clash with Barcelona, those in attendance certainly made their presence felt.

Gennaro Gattuso’s side host Barcelona in the first leg of their Champions League round-of-16 tie this week, looking to take a positive result to the Nou Camp next month.

SEE MORE: Opinion: Why Barcelona look set for another difficult season in the Champions League

With the odds against them given the quality of the opposition, they needed their fans to get behind them and act as a 12th man to create a hostile atmosphere.

As seen, and most certainly heard, in the videos below, they did exactly that even before kick off as they produced a deafening noise around the stadium as they joined in for the Champions League anthem.

The video has gone viral as many have applauded the atmosphere and noise generated by the Napoli faithful, now they’ll be hoping the players do their job on the pitch…