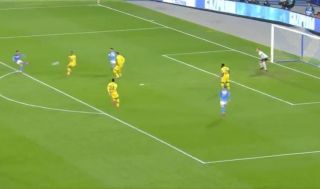 Napoli broke the deadlock in their clash with Barcelona in the Champions League on Tuesday night, and they did it in some style courtesy of Dries Mertens.

There was a cagey opening to the game as both sides had their moments, but neither could find a breakthrough as the first 20 minutes or so passed by.

However, the hosts eventually found a way through as after some sharp build-up play, Mertens was found in space on the left side of the box.

As seen in the video below, the Belgian forward was allowed time and space to cut inside on his favoured right foot, and he did the rest with a brilliant strike from distance to give Marc-Andre ter Stegen no chance.

Barcelona have suffered some disastrous nights in the Champions League over the past two seasons, and they’ll be desperate to bounce back in the right way in Naples…

We think he enjoyed that one! ?

What a goal from Dries Mertens ?

Everything about this Napoli goal is gold ?

Dries Mertens with an EXQUISITE strike to put Napoli ahead against Barcelona! ?#OptusSport #UCL #NAPBAR pic.twitter.com/Y19JpU9IpX

Ciro Mertens, you deserve all the praise tonight, and as always INJECCCTTT ITTTT ??? pic.twitter.com/UJf2MBGKOT