We’re always told that the Premier League is the best league in the world because of how competitive it is, how the title race runs close and every game matters, but that couldn’t be further from the truth this season.

Effectively we have one outstanding team and then everyone else. Don’t get me wrong, I’m sure the Liverpool fans are absolutely delighted with how this campaign has gone, but there’s little in the way of excitement for neutral observers.

The Liverpool Echo reported on some claims by Alan Shearer and it’s clear that he’s in awe of this Liverpool side, but he also looks to defend the state of the league too.

READ MORE: BREAKING: Liverpool open contract talks with Timo Werner as they close in on transfer

Shearer said: “I know it’s the end of February, mathematically it hasn’t been decided yet but, yes, Liverpool are going to win it.”

“In terms of competition, Liverpool have had a freak season. It would not surprise me at all if they went through the season undefeated just like Arsenal did (in 2003-04).”

“Other clubs are in transition in terms of Man City, Tottenham, Chelsea. Leicester have had a brilliant, brilliant season in terms of where they were.”

“But I don’t think it’s a negative on the standard of the Premier League at all. It’s just Liverpool have been that good the others have found it difficult to keep up with them.”

The strange thing is that the unbeaten record is all Liverpool are really playing for now, and that could be the only thing that provides any excitement in their games for the rest of the season.

Getting the record may start to play on their minds and it could cause some mistakes, so in a strange way any upcoming opponents should hope they don’t lose before playing them.

If they lose a game then all the pressure is gone, which could lead to some even more incredible performances afterwards. It’s a big claim for Shearer to say they could go unbeaten for the whole campaign, but it doesn’t look impossible either. 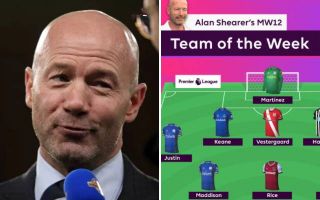