Liverpool have reportedly opened contract talks with Timo Werner as they look to finalise a transfer for the RB Leipzig striker ahead of the summer.

The Reds have long been linked with Werner after his superb form in the Bundesliga, and it now looks as though they’re making significant steps towards getting him in at Anfield.

See the tweet below from Nicolo Schira, who says Liverpool have offered the Germany international a five-year contract with wages of €8million a year if he accepts the move. 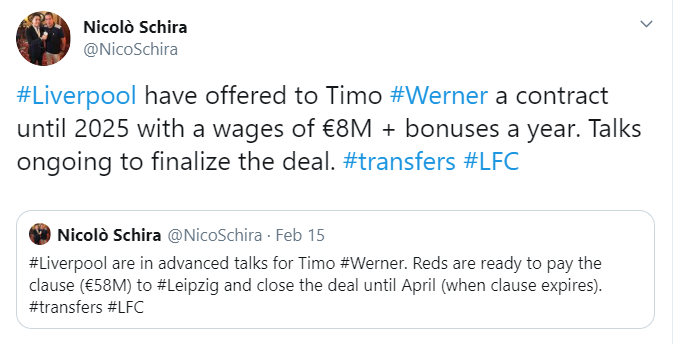 This follows claims that Werner’s future is in Jurgen Klopp’s hands, with the 23-year-old’s preference to join Liverpool over other clubs.

The player has also very publicly praised Klopp and Liverpool in recent times, so it seems likely that he will now be heading to Merseyside.

It remains to be seen how he might fit in in this Liverpool team, but Roberto Firmino has been linked with Bayern Munich, so he could well be a replacement for the Brazilian.