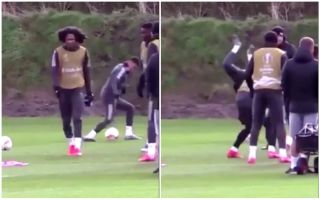 Manchester United star Jesse Lingard appears to have angered some fans for perhaps having a little too much fun in training ahead of the Red Devils’ Europa League clash against Club Brugge tomorrow night.

The 27-year-old appeared to be dancing around the ball alongside teammate Andreas Pereira. Lingard can also be seen doing a handstand.

Even though the England international has struggled for the Manchester outfit over the last year, are some fans harsh for criticising the ace for having fun in training?

Take a look at the attacking midfielder in training below:

Here’s how some supporters reacted to the training clip:

Guy is honestly a joke

He used to be so good, 2-3 seasons ago. What even happened?!

Perform how you train.

Doesn’t help himself at all

That Lingard video of him in training personifies why he needs to be out of United.

Is this being blown out of proportion?