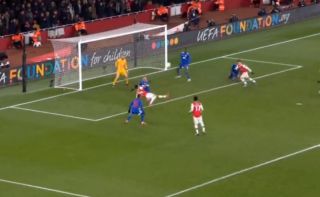 Pierre-Emerick Aubameyang scored a brilliant equaliser for Arsenal to put them back in front on aggregate against Olympiacos.

Watch below as the Gabon international finds the back of the net with a superb overhead kick in extra time to make it 1-1 on the night at the Emirates Stadium in what has been a nervy Europa League clash.

Arsenal have not been at their best by any stretch of the imagination, but, as he’s done so many times before, Aubameyang has got them out of jail with a moment of magic.

The 30-year-old has been such a lethal goal-scorer since joining the Gunners, but unfortunately they went behind again shortly after this superb finish.

Who else but him?!

A spectacular overhead kick to dig the Gunners out of trouble in extra-time. pic.twitter.com/AY66rOjLUC

A WORLDIE & A HALF from Aubameyang in extra time! ??#OptusSport #UEL pic.twitter.com/gMMUkrWq9l