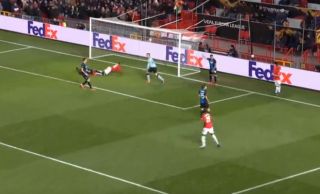 Odion Ighalo has scored his first goal for Manchester United after a flowing team move against Club Brugge in tonight’s Europa League clash.

Watch the video below as the Nigerian goal poacher opens his account for the Red Devils, making it 2-0 in tonight’s game at Old Trafford.

Ighalo has his goal ?

That ball from Fernandes ? pic.twitter.com/ElJVo3A6lU

Ighalo joined United on loan this January and is not exactly the big name some fans will have been hoping for.

Still, he’s here to do a job as cover for Marcus Rashford and he’s doing it, with this kind of finish sure to be enough to make him a cult hero at United.