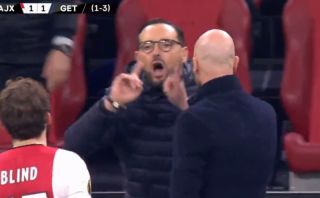 There was a major row that erupted on the touchline during tonight’s Europa League clash between Ajax and Getafe.

Watch the rather amusing video below as Ajax boss Erik ten Hag comes along and wags his finger in Pepe Bordalas’ face as he rants at the referee.

Bordalas doesn’t take too kindly to this from Ten Hag, and gestures back at him, as it all gets rather ugly in this Europa League tie.

Still, in the absence of goals in the games elsewhere this makes for some decent entertainment!