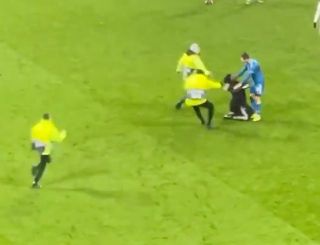 Cristiano Ronaldo has passionate fans across the world, but this one took it a little too far during Lyon’s win over Juventus in the Champions League on Wednesday night.

Lucas Tousart’s goal in the 31st minute of the first leg of their round-of-16 tie was enough to separate the two sides, as Lyon will have something to defend in the return leg next month.

With Juventus chasing the game and in need of a goal, Ronaldo clearly didn’t appreciate the pitch invader making his way onto the field and initially gave him a shove to get him off before he returned for a second bite of the cherry, as seen in the video below.

This time round he collapses at the feet of the Portuguese international and proceeds to hug his legs. Ronaldo attempts to half-hug him to get him back on his feet and away with the stewards, who clearly don’t do a great job.

One falls to the ground while the other two wrestle with the pitch invader to get moving towards the sidelines.

It was an unwanted distraction for Ronaldo this time round, as Juventus will be under pressure to turn the tie around and advance to the next round. The moral of the story being, if you want a selfie with the legend, pick your timing better….

A young kid invaded the pitch yesterday during Lyon’s match against Juventus to get Cristiano Ronaldo’s signature but it totally backfired. CR7 was pissed off. ?? pic.twitter.com/t5NikzHi0X