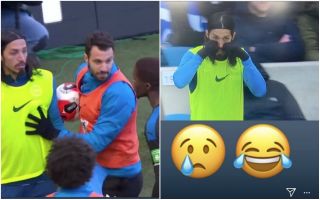 Schelotto, who didn’t even take to the pitch today, was involved in a heated exchange with the tricky winger in the early stages of the match.

Schelotto appeared to indicate that Zaha is a ‘crybaby’ with his taunts from the sidelines.

Crystal Palace won the encounter 1-0 and Zaha made sure to get his own back on Schelotto with this savage post:

Schelotto’s attempts to ruffle Zaha have clearly backfired, I for one can’t wait for the next game between the two sides in the non-derby that has become a derby in recent years.