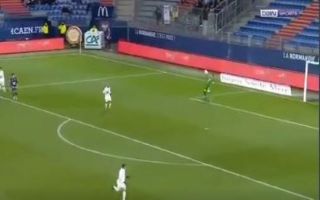 There really is no place to hide for a keeper when they make a horrific mistake, but some mistakes are just so ridiculous that you almost feel sorry for them.

This action came from Caen vs Grenoble last night, as the Grenoble keeper Brice Maubleu inexplicably threw the ball towards his own goal while under no pressure:

It looks like he goes to throw it out, only to change his mind just after it was too late and he tries to hold onto it instead. It’s almost comical slow motion as he scrambles to stop it going over the line, but he can’t stop the goal from happening.

It’s deeply embarrassing and also came just a minute after his team conceded the opening goal. As expected, it completely knocked the stuffing out of them and the game finished 2-0 to Caen.