Liverpool midfielder Georginio Wijnaldum has sent a message to his teammates following the club’s 3-0 defeat at the hands of Watford last night.

The Anfield outfit were 44 games unbeaten in the Premier League and on an 18 match winning streak going into the game against Watford.

However, the Premier League leaders lost 3-0 to a spirited Watford side at Vicarage Road and the result ensured that Liverpool wouldn’t match Arsenal’s record of remaining unbeaten for the entire season like the Gunners managed in 2003-04.

As seen below, taking to Instagram after the game Wijnaldum posted: “Tough losses should be an opportunity to improve. Time to regroup and give it our all in the very next opportunity we get”

While on a separate Instagram story, Wijnaldum added: “When you don’t win. Make sure you learn” 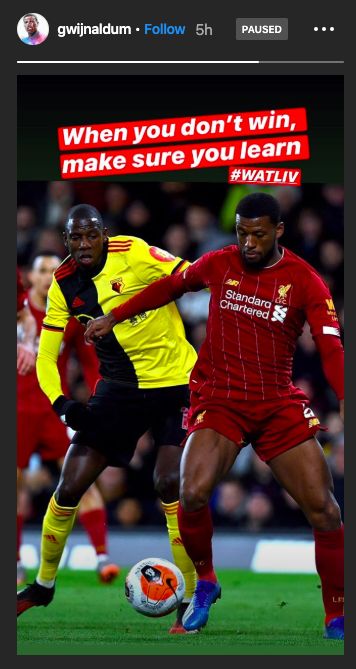 In what was their first Premier League defeat of the season, Liverpool looked jaded and impotent against Watford and their performance in the game lacked their usual tenacity, sharpness and aggression.

Despite the loss, the Reds remain top of the Premier League on 79 points, 22 points ahead of second-placed Manchester City and are cruising towards their first Premier League title.

However, just as Wijnaldum states, the club must bounce back from this defeat to continue to perform as well as they have been doing all season.