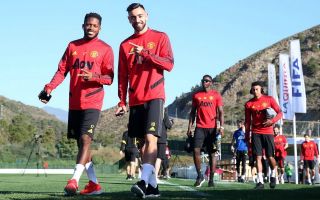 Manchester United players have reportedly been left ‘blown away’ by the quality of Bruno Fernandes as he impresses with his performances on the training pitch.

The Portugal international looked a class act with his large numbers of goals and assists in his time at Sporting Lisbon, and it’s clear from the way he’s started for Man Utd that he’s the real deal.

According to the Metro, Fernandes has made a real impression to those who get to watch him closely every day, and he was instantly ready to train with his team-mates when he first joined the club.

Despite United preparing a separate training schedule to get Fernandes up to speed, the idea was quickly scrapped as the 25-year-old was already in good enough shape to train with the rest of the squad, according to the Metro.

MUFC fans will be delighted to hear Fernandes is settling so well, with many of the club’s recent big-name signings proving major flops.

Paul Pogba, Romelu Lukaku and Alexis Sanchez did not work out as expected, but Fernandes looks to be a fine piece of business already.