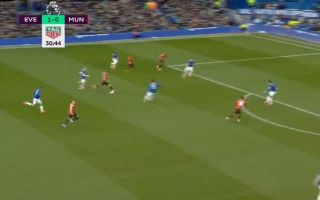 David de Gea might be thankful for this goal from Bruno Fernandes for a couple of reasons.

Firstly it cancels out Everton’s opener which was the result of a shocking mistake from the Spaniard, plus he’s no longer the only keeper on the pitch who should take the blame for a goal.

Bruno Fernandes arrived for €55m according to the BBC, and he’s shown his class straight away. He’s instantly provided some creativity in the midfield and this goal today came at a vital time.

It’s a great hit, but Jordan Pickford needs to save this:

It’s been an entertaining game with both sides looking like scoring whenever they get forward, so don’t be surprised if there’s more goals in this one.