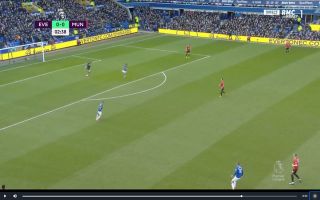 In the third minute of this afternoon’s Premier League clash between Everton and Manchester United, the Toffees took the lead after a horrific blunder from David de Gea.

With the ball being played back to De Gea from a free-kick, the Spaniard attempted to clear the ball, but his effort was deflected into the back of the net by a rushing Dominic Calvert-Lewin.

Take a look at Everton’s early opener below:

Carlo Ancelotti’s men have disrupted Ole Gunnar Solskjaer’s game plan by taking an early lead. Can the Red Devils get back into this clash?