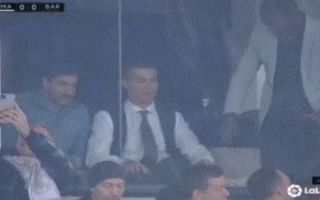 It was never clear if Cristiano Ronaldo left Real Madrid on good terms, but he’s managed to get some nice seats for the Clasico at fairly short notice so you have to think things aren’t too frosty.

Unfortunately the ongoing Coronavirus situation in Italy has suspended some games in Serie A just now, so the Real legend has made his way to Madrid to watch his former team in action:

? Cristiano Ronaldo making the most of his night off with Juventus v Inter having been postponed pic.twitter.com/3ju3tWFToY

You have to imagine that a lot of players want to watch games like these, but it’s rare to see active ones actually attend the stadium to watch.

He’s had to endure his former team looking wasteful in attack so far, and he must know he could still make a massive difference if he was on the pitch.