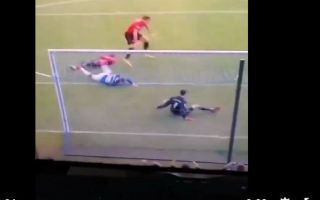 There was already enough controversy about the Dominic Calvert-Lewin disallowed goal against Man United today, but when you focus on something else in the build up it gets worse from an Everton point of view.

All of the focus goes towards the offside incident and trying to determine if the Everton player is interfering with play, but before that happens, The Toffees had a great shout for a penalty:

Dominic Calvert-Lewin finds the net with a deflected effort, although it’s controversially ruled out by VAR for offside!

It’s one of those incidents where it probably gets given if it happens anywhere else on the pitch, but it also happens before the ball comes back in for the offside call.

Everton were already furious about the decision to disallow the goal, but this could make things worse.