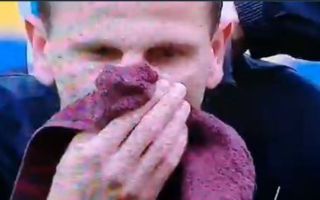 There will never be anything more glorious than the player who broke his nose by kicking the ball off his own face which then resulted in an own goal, but this is up there.

This action comes from Poland where LKS Lodz defender Marcin Dabrowski makes an attempt to get a shot in on goal, but can only connect with his own face:

To make matters much worse, this was in the opening few minutes of the game so he had to be subbed off. It’s also difficult to get a lot of reports on the Polish leagues, but the suggestions just now are that he broke his own nose with this effort too.