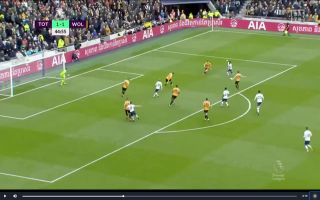 During stoppage time in the first-half of this afternoon’s Premier League encounter between Tottenham and Wolves, Spurs’ lead was restored after a moment of brilliance from Serge Aurier.

Dele Alli picked up the ball in the final third and laid the ball off to the marauding right-back, Aurier cut on to his weaker left foot and smashed the ball into the back of the net.

Take a look at the Ivorian’s brilliant finish below:

What a strike from the Tottenham defender ? pic.twitter.com/6mlCk3gPzx

Rui Patricio was left completely rooted to his spot after Aurier’s strike, Jose Mourinho’s side will now be hoping to maintain their lead in a match that will be pivotal to their race for a top four spot this season.