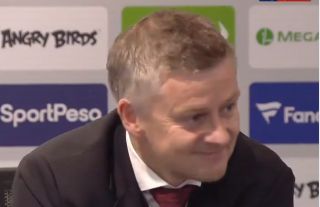 Manchester United manager Ole Gunnar Solskjaer perhaps went a little over the top with his bid to stick up for goalkeeper David de Gea after his blunder gifted a goal to Everton in Sunday’s Premier League clash.

Speaking in the video below, the Norwegian tactician praises De Gea as the best goalkeeper in the world, which was certainly true a few years ago but probably not now…

Is David De Gea the best 'keeper in the world? ?pic.twitter.com/xYBhToBmPF

De Gea did make up for his error with some important saves, as mentioned by Solskjaer, but the Spanish shot-stopper surely needs to be doing better and Man Utd fans think now is the time to replace him.

Solskjaer perhaps thinks otherwise and it makes sense that he might want to boost the player’s confidence, but best in the world? You’re not fooling anyone, Ole.