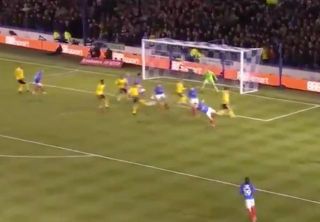 Arsenal struggled to find a breakthrough against Portsmouth on Monday night, but they eventually broke the deadlock just before half-time thanks to Sokratis.

The Gunners lost Lucas Torreira to an injury blow early on, while the hosts threatened throughout as they tested Arsenal’s backline.

However, as seen in the video below, it was the away side who took the lead as Sokratis produced a superb finish from a Reiss Nelson cross as he volleyed home with the precision and technique of a forward.

Mikel Arteta will no doubt be relieved to have found the opening goal just before the break, as it changes his team talk to the players and gives them something to protect in what had been a tricky encounter up to that point.

As for Sokratis, he’ll now hope to do his day job and keep things tight at the back in the second half to preserve Arsenal’s lead and ensure that they safely advance to the next round…

Sokratis' crisp volley has Arsenal ahead at Fratton Park ? pic.twitter.com/AjgkigRV9I