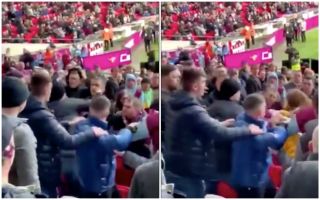 Some Aston Villa fans were filmed fighting amongst themselves inside the stands at Wembley during yesterday’s Carabao Cup Final against Manchester City.

A small brawl seemed to spark during Aston Villa’s Carabao Cup Final yesterday, several supporters can be seen throwing punches towards one another.

The rest of Villa’s support singled out the embarrassing fans, with one calling the offenders a ‘disgrace’ to the club.

A cup final is the last place where you’d expect such a childish incident to occur, dedicated Villa fans will be disappointed to see this small group painting the Midlands outfit in a bad light.

Video: Former Chelsea great makes astonishing admission about where he wants to end his career

Villa fans fighting with each other again. ??? pic.twitter.com/AlCuVHUlcc