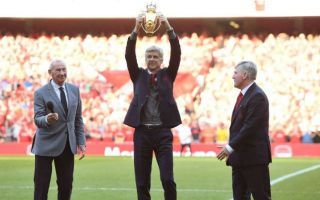 Arsenal legend Lee Dixon believes the 1997/98 double-winning side he played in were better than the 2003/04 ‘Invincibles’ who went the entire Premier League season unbeaten.

Both these great Premier League sides were managed by Arsene Wenger, with some world class players shining in both teams and playing some of the finest football this country has seen.

Still, it is usually only the 03/04 unbeaten side that is talked up as one of the true all-time greats, with that team also holding the record for the longest ever unbeaten run in English football – 49 games.

Some have debated, however, if the number of draws and close victories that side chalked up means the achievement is not as big a deal as some make out.

Dixon played in Wenger’s first title-winning side and certainly seems to think that they would have beaten the Invincibles more often than not, though he doesn’t exactly explain why he thinks that is.

“Look I didn’t play in that team- It was a brilliant team,” he said, as quoted by the Metro.

“I watched them throughout that season and I wanted them to go undefeated because they deserved to but I honestly think the best team I played in was the 1998 team.

“If we played the ‘Invincibles’ ten times and there were no draws, we’d win 6-4.”