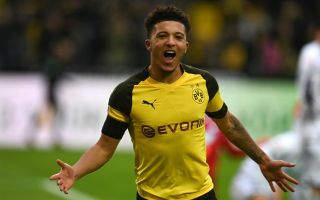 Manchester United reportedly have the advantage over a number of top clubs in the race to seal the transfer of Jadon Sancho this summer.

The Borussia Dortmund winger is one of the most exciting young talents in the world at the moment, and it looks a tad ambitious for his current club to hold on to him for much longer.

According to the Daily Mirror, Sancho currently favours a return to the Premier League with Man Utd, despite the Red Devils not looking guaranteed to be able to offer Champions League football next season, unlike other suitors mentioned in the report, such as Real Madrid and Paris Saint-Germain.

While United are clearly still one of the biggest names in world football, it does seem a tad risky for Sancho to drop down a level like this at such an important moment in his career.

The England international has impressed in the Champions League and could surely continue to do so at Real or PSG, even if regular playing time might be more likely at Old Trafford.

It also makes sense that the 19-year-old wants to move back to England after a spell in Germany, though even then one imagines he could still be more picky about his next club.