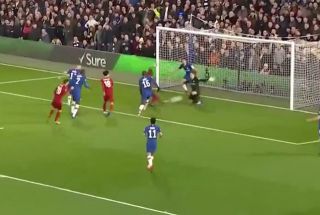 Frank Lampard restored Kepa Arrizabalaga to his Chelsea starting line-up on Tuesday night against Liverpool, and he will have been thrilled with his decision.

The two sides met in the fifth round of the FA Cup at Stamford Bridge, with Willian giving the hosts an early lead as his effort couldn’t be stopped by Adrian.

It looked as though Liverpool were set to draw themselves level, but Kepa had other ideas as seen in the video below.

The Chelsea shot-stopper made three superb saves to keep the Reds out, first saving from close-range at his feet before quickly regrouping and re-composing himself to get to his feet and pulling off two more top saves to protect his clean sheet.

It remains to be seen whether or not that proves to be a decisive passage of play as Liverpool look to avoid back-to-back defeats across all competitions after their first Premier League defeat of the season at the weekend at Watford.

For Kepa though, he’ll be delighted to make such a crucial impact on his return to the starting line-up after being dropped by Lampard in recent weeks, and he’ll hope to continue to play a key role to guide Chelsea through to the next round.

Kepa is back in the side and looking to make amends!

A brilliant triple save to deny Liverpool ? pic.twitter.com/guNDuf7qi7

Kepa is well and truly back ??pic.twitter.com/HtKZ72MJ1y