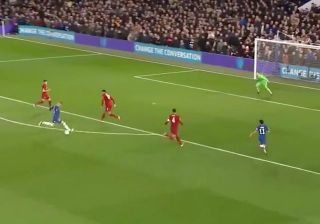 Chelsea doubled their lead against Liverpool in their FA Cup clash just after the hour mark after some brilliant play from Ross Barkley.

Willian had given the Blues the lead early on in the first half, while some brilliant goalkeeping from Kepa Arrizabalaga ensured that they went into half-time with an advantage.

Liverpool looked like they were threatening at the start of the second half as they tried to launch a comeback, but Barkley had other ideas.

As seen in the video below, after a flick on from Olivier Giroud, Barkley ran half the length of the pitch before composing himself and smashing a finish past Adrian to find the back of the net.

It was a classy goal from the Chelsea star and it gives them a huge advantage now as they look to secure their place in the next round of the FA Cup.

Pedro and Giroud went close to adding a third soon after to try and put the game to bed, with Liverpool looking to avoid back-to-back defeats over the past few days.

Ross Barkley does it all on his own! ?

What a goal from the former Evertonian to double the lead over Liverpool! pic.twitter.com/T4Dqo2df5R