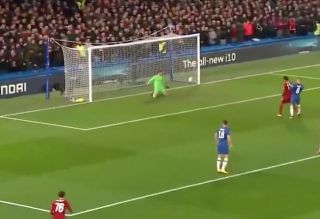 Chelsea broke the deadlock in their FA Cup tie with Liverpool on Tuesday night as Willian gave them the lead after 13 minutes.

It was a lively start from both sides as they went in search of the opening goal, which in turn led to a frenetic pace being set as they both had their moments.

SEE MORE: Transfer boost for Chelsea as Porto ready to cash in and take £20m for Summer target

However, the hosts just started to get on top after 10 minutes or so, and Adrian did well to deny them the first goal with two good saves.

Unfortunately for the Merseyside giants, the Spanish shot-stopper will be annoyed with himself that he couldn’t keep Willian’s strike out. As seen in the video below, although it was struck fiercely by the Chelsea winger, Adrian will surely feel as though he should have done better.

Following their first league defeat of the season at the weekend, Liverpool boss Jurgen Klopp will be hoping for a reaction from his players to avoid suffering back-to-back losses across all competitions.

Too hot to handle! ?

Willian's venomous strike is right at Adrian but goes straight through the keeper ? pic.twitter.com/tiuUVSLdpf