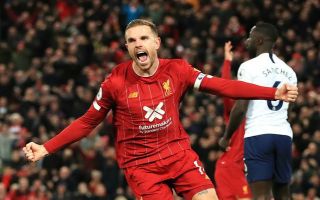 Gary Lineker is of the opinion that Jordan Henderson’s injury could see him win the PFA Player of the Year award.

The Liverpool captain has had an impressive season so far, netting three goals and providing five assists in 34 appearances across all competitions so far. Henderson sustained an injury during the match against Atletico Madrid which has seen him sidelined ever since.

Liverpool have played three matches without their captain, losing two of them while barely managing to beat West Ham. Following their match against Chelsea last night, Lineker tweeted that Henderson’s injury could win him the PFA Player of the Year. The former England international wrote: “There’s every chance that @JHenderson’s injury could well clinch him the Footballer of the Year trophy. Sometime’s you don’t realise a player’s importance to a side until they’re absent.”

There’s every chance that @JHenderson’s injury could well clinch him the Footballer of the Year trophy. Sometime’s you don’t realise a player’s importance to a side until they’re absent.

Henderson who has often been under-appreciated for much of his career, has received much praise for his performances this season. His importance to Liverpool has been made clear in 2019/20, and with the team losing two of their last three matches, the 29-year-old’s importance has been highlighted even further. His character and leadership has been influential to the club and they will surely be desperate for him to return to action as quickly as possible.

As far as Henderson winning the Player of the Year is concerned, there are perhaps a few players who deserve the award more than him, like Kevin de Bruyne, who’s had an exceptional season for Manchester City so far. However, the LFC captain could well find a place in the PFA Team of the Year if he maintains his good form after returning from injury.