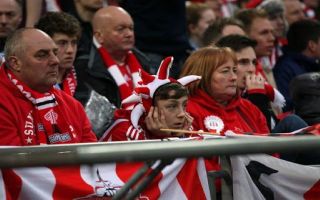 It really speaks volumes that despite everything that has gone on with Newcastle in recent years, it’s still Sunderland who are the laughing stock of the north-east.

Newcastle have had to put up with so many awful managerial appointments, relegation and Mike Ashley stripping a lot of joy from the team – in a way it was even more cruel that they had a taste of having a real manager in Rafa Benitez only to see him walk away.

Sunderland have had it much worse though, and it’s been coming for a while. Somehow managing to escape relegation in an impossible way every season was never going to be sustainable, but few thought they would fall this far.

They now find themselves struggling to get out of League One, but many fans may remember a Netflix Documentary about them a few years ago which was clearly hoping to show them bounce straight back, but that didn’t happen.

The opening scenes showed fans optimistically predicting a comfortable win over Celtic in a pre-season friendly to set the tone – Celtic won that game 5-0 and the tone was very much set.

It ended with their second relegation in a row, and it seems we have a second series to watch soon, but the timing of the release is suspect:

Sunderland ‘Til I Die season 2 arrives on April 1st. And no, we didn’t do that on purpose.

You might think that the joke writes itsself there, but the Newcastle United account couldn’t resist having a pop either:

In fairness, the first series gave a great insight into the fans at the club and even gave Martin Bain a chance to do a convincing David Brent impression throughout, so it should be a good watch.

It might be tough viewing for the Sunderland fans however…