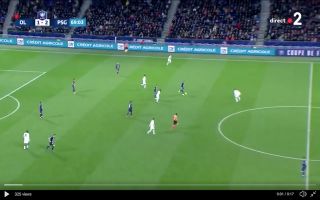 In the 71st minute of this evening’s cup clash between Paris Saint-Germain and Lyon, Kylian Mbappe showcased his mercurial talent to score one of the goals of the season.

The 21-year-old intercepted the ball in his own half before charging forward, he used his lightning-fast speed and a silky step-over to beat the first Lyon player that tried to stop him.

Mbappe burst forward and tricked a Lyon defender with a perfectly-timed fake shot before slotting the ball into the back of the net.

There’s no doubt that this is one of the goals of the season so far, it’s similar to the amazing effort from Heung-Min Son against Burnley earlier in the season.

Take a look at the World Cup winner’s magnificent effort below:

Mbappe is silly. He’s got a jet pack on ffs. pic.twitter.com/WP7haLS8Kg