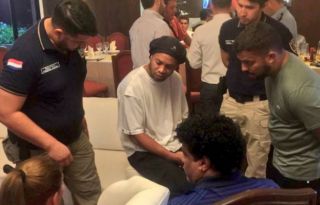 Brazilian football legend Ronaldinho has been arrested in Paraguay over fake passport claims.

According to Goal.com ( via Argentine newspaper La Nacion), the 39-year-old and his brother Roberto have been detained at the Resort Yacht & Golf club Paraguayo in Lambare after passports found in their rooms had Paraguayan nationalities. The country’s authorities are yet to issue a statement.

The Paraguayan police have claimed that Ronaldinho and his brother were invited to the country by a casino owner named Nelson Belotti. The World Cup and Champions League-winning footballer was supposed to host a few publicity events and interact with the fans with the media invited to witness this.

Considered to be one of the greatest footballers of his generation, Ronaldinho is best remembered for his time at Barcelona, winning the Ballon d’Or during his spell there and later the Champions League. He also played a key role in Brazil claiming their 5th World Cup in 2002.

It’s only a matter of time before the Paraguayan authorities have their say on Ronaldinho’s passport situation.

Ronaldinho and his brother have been arrested for entering Paraguay with fake passports.

His fake passport shows his correct name, birthplace, and birthdate, but it falsely suggests that he’s a naturalized Paragauay citizen. [@Santula] pic.twitter.com/qOVEi7xPmi

Ronaldinho has been arrested in Paraguay for entering the country with a fake passport. His Brazilian passport was seized in 2018 for undertaking some illegal activities. He had only $6.59 in his bank acct; couldn’t pay $2.3m fine.

A genius on the pitch but terrible life choices pic.twitter.com/c8JT0GhzfT