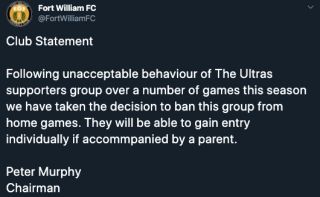 It’s not too often that you see a football club chairman directly addressing supporters of his club via social media.

However, that’s exactly what Fort William FC’s Peter Murphy has done, and with quite hilarious consequences.

Clearly, Mr. Murphy’s patience had begun to wear thin with a certain group of his club’s fan base, and that appears to have led to him taking decisive action.

In so doing, he has ruined their reputation in just a few words, and the comedic undertones in his tweet were there for all to see.

Following unacceptable behaviour of The Ultras supporters group over a number of games this season we have taken the decision to ban this group from home games. They will be able to gain entry individually if accommpanied by a parent.

‘Ultra’ supporters at football clubs have become something of a scourge, given their general reputations for unruly behaviour and, often, violence.

There can be no place for such actions, particularly if women and children also happen to be in attendance.

Peter Murphy will probably find he has woken up a hero on Friday morning after putting this set of supporters down in the best possible way.