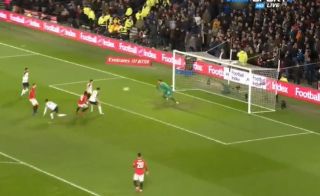 Odion Ighalo has scored his second goal in two starts for Manchester United as he makes a flying start to life on loan with the Red Devils.

The Nigerian was a surprise January signing for United, but he’s doing precisely the job he was brought in for as he shows himself to be fine cover for the injured Marcus Rashford up front.

Watch the video above as Ighalo nets against Derby County in tonight’s FA Cup clash at Pride Park.

This is an important game for United as this competition could represent their most realistic chance of a trophy this season.