The 18-year-old played a major role in Brazil winning the U17 World Cup last year. Jorge was one of the best players of the tournament, netting five goals including one in the final against Mexico while providing an assist. He was eventually awarded the Bronze Boot with only top scorer Sontje Hansen finding the net more than him.

According to Goal.com, Juventus are keeping close tabs on Jorge who has attracted interest fro European clubs. This report also claims that the striker has a release clause of €50 million.

Jorge is currently at Brazilian club Santos and has made one appearance for them in a Copa Libertadores match against Argentinian club Defensa earlier this week, scoring the late winner in an eventual 2-1 winner.

Juventus have some pretty good attacking options in their squad that include Cristiano Ronaldo and Paulo Dybala. It would be very difficult for Jorge to make the first-team but he is someone who could be pretty useful for the Bianconeri in the future if signed by them. 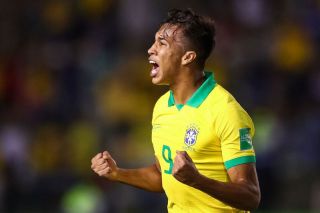