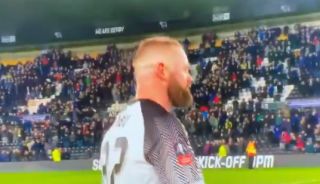 The Red Devils beat Derby County 3-0 in the FA Cup and enjoyed their reunion with Rooney, though he was subjected to a typical anti-scouser chant from United fans…

So many chants for Rooney from the travelling fans tonight. Nice to see him give them some recognition ? pic.twitter.com/Pa27kXMcPg

Rooney could not get on the score sheet tonight but it clearly meant a lot to him to get a good reception from Man Utd’s travelling fans.

MUFC will now take on Norwich City in the FA Cup quarter-finals.