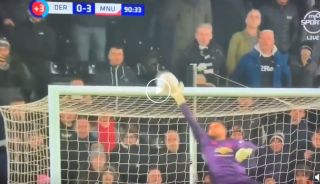 Wayne Rooney was denied a superb goal against his former club Manchester United as Sergio Romero kept his free-kick out with a fine save.

The 34-year-old struck this effort beautifully as he took on his former employers, but Romero had no room for sentiment as he did his best to keep the effort out.

Sergio Romero great save from Rooney free-kick from r/soccer

Rooney will no doubt have been eager to get a goal against United tonight, but it was a frustrating evening for Derby as they lost 3-0 to crash out of the FA Cup.

MUFC now take on Norwich City in the next round of the competition.