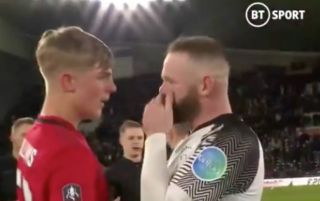 Although his team had just lost 3-0, Derby County’s Wayne Rooney showed there were no hard feelings after the match.

His old club, Manchester United, did what they needed to in order to progress in the FA Cup, and despite any disappointment that Rooney might’ve felt, he didn’t show it.

A warm hug for Ole Gunnar Solskjaer was followed by what appeared to be words of encouragement for new United starlet, Brandon Williams.

Coming after a great performance from the 34-year-old, no wonder the thousands of United fans that had travelled to the game were singing his name.

Wayne Rooney with a hug for Solskjaer and some words of encouragement for Brandon Williams at full-time in the #EmiratesFACup pic.twitter.com/qK79feCkUv