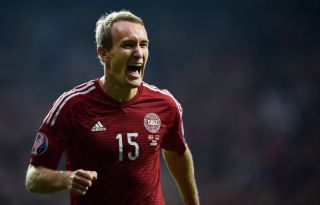 Ex-Denmark star Thomas Kahlenberg has reportedly been placed in quarantine after testing positive for coronavirus.

As the outbreak continues around the world with cases reported and death rolls rising, it has wreaked havoc with sporting schedules, postponements and with events being played behind closed doors.

However, the most important aspect is trying to contain it and avoid it claiming more lives, but the number of cases is seemingly continue to increase in various countries.

As reported by talkSPORT, Kahlenberg has now caught the virus, with the 36-year-old said to have contracted it while on a trip to Amsterdam.

Having then gone on to attend Brondby’s game against Lyngby on Sunday, 13 members of staff at the club have also been placed in quarantine as they investigate whether or not any others have caught the virus after coming into contact with Kahlenberg.

Three Lyngby players are also in quarantine, the report adds, as health officials look to trace back to anyone who might have come into contact with him during his trip or otherwise.

Naturally, it’s hoped that the virus has been identified in the relevant people at an early stage, and so they can now receive the necessary treatment to make a recovery.