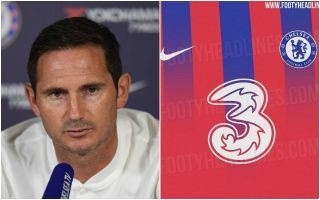 According to Footy Headlines – a reliable source for leaked football kits, this is Chelsea’s third kit for next season.

Chelsea recently announced mobile network ‘3’ as their official shirt sponsor from next season, the company’s logo can be seen on the Blues’ leaked shirt.

The primary colour of the strip appears to be a light red or pink, dark blue stripes will also fade down the shirt. This is certainly a surprising design.

Chelsea’s leaked kit appears to very closely resemble the home shirt of fellow London outfit Crystal Palace. Is it strange for the Blues to use colours from a club some of their fans might see as rivals?