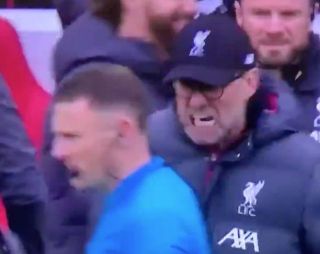 It’s fair to say that Jurgen Klopp enjoyed Liverpool’s second goal against Bournemouth, and the fourth official certainly knew about it.

The Reds fell behind against the Cherries after Callum Wilson broke the deadlock, but the hosts were aggrieved after they believed there was a shove on Joe Gomez in the build-up to the goal.

Fortunately from a Liverpool perspective though, goals from Mohamed Salah and Sadio Mane turned things around and gave them a lead at the half time interval.

Clearly still emotional after that initial decision from the officials, Klopp enjoyed the second goal going in to give his side the lead, and he made no attempt to hide his joy in front of the fourth official as he walked past.

klopp to the fourth official coz of the first goal??? pic.twitter.com/nKcHg4XFQi