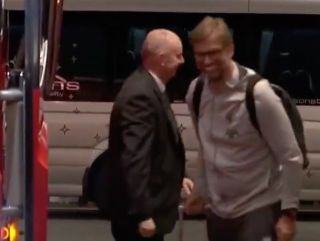 As the coronavirus outbreak continues with new cases being reported in the UK, Jurgen Klopp is taking the necessary precautions it seems.

The Premier League have banned pre-match handshakes between the players as they look to minimise the risk of spreading the virus, while it remains to be seen what health officials decide moving forward if the situation worsens across the country.

The Liverpool boss has already stressed that he’s not the person to be asking about coronavirus during his press conference during the week, as he’s keen to leave that to the experts and they can decide what the best approach is.

However, he came up with a new way of greeting the team bus driver on Saturday ahead of their clash with Bournemouth at Anfield, as seen in the video below.

The German tactician decides to what can only be described as ‘elbow bump’ the driver before turning away with a big grin on his face as it’s a pretty clever way to avoid a handshake and risk germs spreading.

That said, a number of people replied by noting that the pair both touched the handle of his bag, and so it was probably irrelevant that they didn’t shake hands anyway.

Still, it’s good to see Klopp is aware of the risks and will no doubt be stressing the same importance to his players…

No handshakes for Jurgen Klopp.. ? pic.twitter.com/zshMOf2zpZ