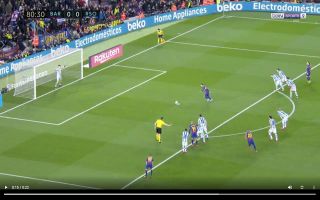 Barcelona took a late lead in the 81st minute of this evening’s La Liga clash against Real Sociedad after being awarded a penalty.

Robin Le Normand was punished for a handball during an aerial duel with Clement Lenglet. Lionel Messi stepped up confidently to the penalty spot and tucked the ball into the bottom corner.

MORE: Boost for Barcelona as belief is influential ace wants to stay amid exit rumours

The goalkeeper went the right way, but he had no chance of keeping out a strike that was this accurate.

Sociedad fans will be devastated, especially considering that Messi escaped punishment after appearing to stamp on defender Diego Llorente earlier in the game.

Take a look at the six-time Ballon d’Or winner’s crucial goal below:

It's a late opening goal for @FCBarcelona as the Argentine calmly sinks in his penalty to get his 19th league goal of the season and makes it 1-0 to the Blaugrana.#BarçaRealSociedad LIVE NOW ??
? beIN SPORTS
??CONNECT https://t.co/LRYa03w6yI pic.twitter.com/LuVz2YIqOn