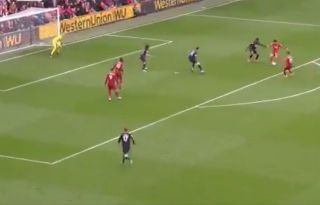 Liverpool fell behind against Bournemouth on Saturday but there was relief as Mohamed Salah found an equaliser soon after.

Callum Wilson broke the deadlock early on for the visitors at Anfield, although Jurgen Klopp was left fuming after a shove on Joe Gomez in the build-up to the goal went unpunished.

The mood at Anfield improved soon after though, as Salah found a brilliant finish to draw them level to alleviate some of the pressure for the Premier League title chasers.

As seen in the video below, the Reds forward cut in from the right and found the bottom corner with a fine strike, and it wasn’t long after that Sadio Mane turned things around and put Liverpool ahead.

Jurgen Klopp’s side are looking to take another step towards the Premier League title, and they would certainly have settled some nerves with a quick double salvo…

Give Liverpool a chance, and they'll take it ??

Salah With the Smooth Finish ?

Liverpool fans breathe a sigh of relief ? ( … for now) pic.twitter.com/vFGtcq4CBr