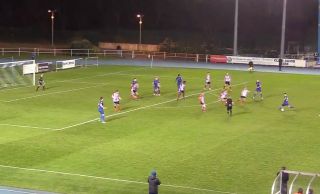 Regardless of league or level, we appreciate a brilliant goal when we see one and Shane Griffin provided one on Friday night for Waterford.

Derry City took the lead in their encounter after 32 minutes, but Sam Bone drew Waterford level with a superb goal of his own to set the stage.

It all seemed as though the two sides would have to settle for a draw, but Griffin had other ideas as he produced a rocket of an effort from distance in the 95th minute.

As seen in the video below, the ball drops to him well outside the box, but he steadies himself and side-foots a sensational effort into the top corner to give the goalkeeper no chance.

The pace and accuracy on the strike is unbelievable, and given this was Waterford’s first home win of the season, Griffin ensured that they sealed it in some style and in dramatic fashion.

Poor Sam Bone after scoring a worldy and Shane Griffin pops up with this…#WeAreWaterfordFC #Blues pic.twitter.com/GJ7DoQGhei