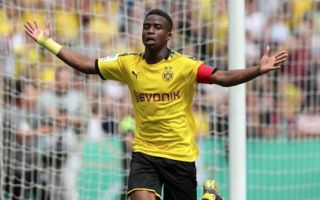 Borussia Dortmund’s 15-year-old youngster Yousouffa Moukoko set a new Bundesliga U19 goalscoring record by netting 34 goals this season for the club in the German youth league.

As seen in the tweet below, Moukoko scored a brace late on in Borussia Dortmund U19’s 3-0 win against Rot-Weiss Oberhausen earlier this weekend to reach the milestone.

This was Moukoko’s 34th goal in his 20th appearance this season. This comes on the back of the youngster’s stellar 2018/19 season where he scored 50 goals in 28 Bundesliga U17 games.

Now as per reports in AS, the Dortmund youngster could begin training with the BVB senior team as early as March 2020.

Moukoko looks all set to beat former Borussia Dortmund youth product Nuri Sahin’s record of being the youngest player to feature for the BVB senior team.

The Turkey international Sahin featured for Dortmund at the age of 16 years and 11 months in August 2005 and it now looks likely that Moukoko will eclipse that record.

It’s already apparent that Moukoko has a bright career ahead of him.