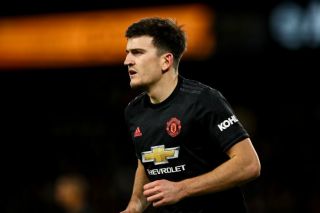 Sergio Aguero’s nutmeg take-on on Manchester United’s Harry Maguire is just the 13th time the United defender has been dribbled past all season.

Aguero, who is now 31-years-old, hasn’t lost his sharpness in-game and pulled off a superb nutmeg on Maguire in the Manchester derby.

Harry Maguire is usually rock-solid at centre back at the heart of the Red Devils’ defence and is strong on the ground and as 1 v 1 defender.

As seen in the tweet below, the Manchester United captain has only been dribbled past 13 times in the Premier League all season and Sergio Aguero’s nutmeg on the United defender was the 13th time he has been beaten.

Sergio Agüero's take-on against Harry Maguire was the 13th time the Man Utd captain has been dribbled past this season.

Manchester United currently lead Man City 1-0 in the Manchester derby with a goal from Anthony Martial as it stands at half time.

Maguire and his United teammates will be looking to maintain their lead and win the game against City to complete a historic Premier League double over their city rivals.