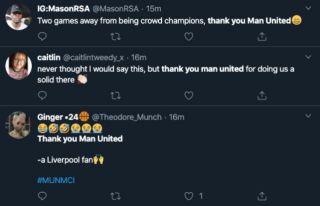 After Manchester United’s impressive win over Manchester City on Sunday afternoon, it appears that club rivalries have gone out of the window.

The Red Devils’ victory means that Liverpool now only need two wins instead of three to earn their maiden Premier League title.

It’s possible that they could even win it in their next match against Everton, if Pep Guardiola’s side are also unable to beat Arsenal in midweek and then Burnley next Saturday afternoon (Liverpool play on the Monday).

With excitement building on Merseyside, supporters of the Reds just couldn’t contain themselves once Scott McTominay had put the derby result beyond doubt with a magnificent 40-yard injury time goal.

Taking to Twitter to air their views, there was a consistent stream of messages where United were actually being thanked by Liverpool supporters for bringing them closer to their Holy Grail.

Bookmark the date, because there’s not too much likelihood of this happening again anytime soon.

Two games away from being crowd champions, thank you Man United?

never thought I would say this, but thank you man united for doing us a solid there ??

Thank you Man United..
Always wanted us to win the league at Anfield…
Emotions will be everywhere… Just need to win 2 more games. ?
And besides.. City will. Give us a guard of Honour at the Empithad?