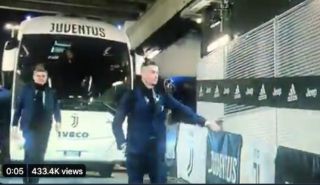 With the coronavirus having taken hold of large swathes of Italy, the Serie A game between Juventus and Inter Milan is being played behind closed doors on Sunday night.

No supporters at the game produced a comical image as the players disembarked from the team bus.

As Cristiano Ronaldo came into view, he made his way over to where the Juve supporters would normally be standing, and with a wicked grin on his face, he began high-fiving absolutely nobody!