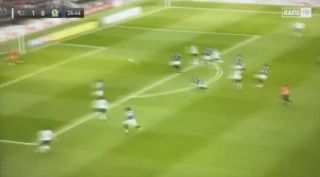 There’s surely few better ways than to mark your debut than with a goal.

For 18-year-old Derby County youngster, Louie Sibley, he didn’t just score, he almost took the net off with a pile driver into the top corner against Blackburn Rovers.

In the 27th minute of the game, there appeared to be little danger as Sibley received the ball about 25 yards from goal.

Showing no signs of nervousness, he opened his body up to control the ball with his first touch, and then let fly.

His left foot shot was hit with such venom that even a full-length dive from the keeper couldn’t get anywhere near it.